Massive growth of Entertainment solutions in Portugal and beyond 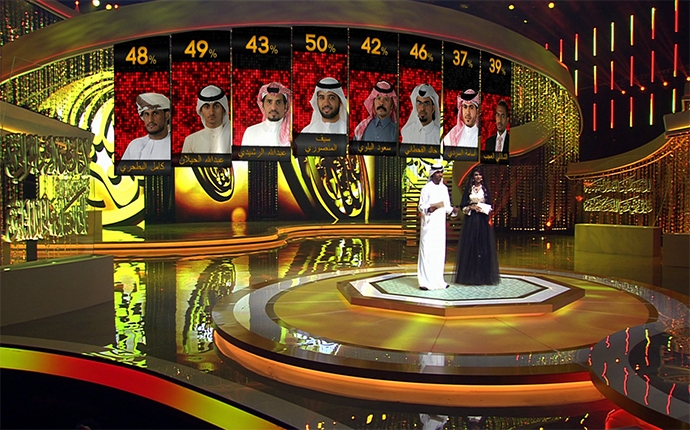 This March, wTVision has provided graphics solutions for 1 UAE and 5 Portuguese entertainment programs, some of them including interactive features for the spectators. The versatility of Builder CG allows the creation of very customized TV shows, such as integration with social media, voting systems, interactive contests, etc.

More about the projects:

One of the most successful Arab TV shows of all time, this poetry contest now presents a new look that was created by wTVision’s designers. The graphics were managed by the client's operators, after they were trained by wTVision's personnel. The TV show had a HD production for the first time and the solution included integration with Twitter, allowing the operator to launch on-air graphics with tweets from viewers. Million’s Poets is now on its 6th edition and wTVision has been providing graphics services since 2012.

wTVision’s programmers implemented the graphics layouts, while the company’s operators managed the graphics playout, for both the final and semi-final. The company assured that all official data from the voting systems, which included SMS voting and the jury’s scores, was integrated with wTVision’s on-air graphics system.

wTVision developed the program’s complete graphics package for the client, Endemol, and implemented the graphics in the client’s infrastructure. The service included the graphics playout by wTVision’s operators, such as a karaoke to help the guests to sing.

The service for this debate show included the implementation of the show’s new graphics and integration with Twitter and Facebook, allowing the operator to insert information about tweets and posts, made by the viewers, in the on-air graphics.

The original graphics were adapted to the new format by wTVision’s designers. The solution included implementation in Builder CG and graphics operation. The program was aired in the Portuguese channel RTP.

This show was a special edition of the Portuguese show “Prós e Contras”, with special graphics, implemented by wTVision, and graphics playout handled by the company’s operators.