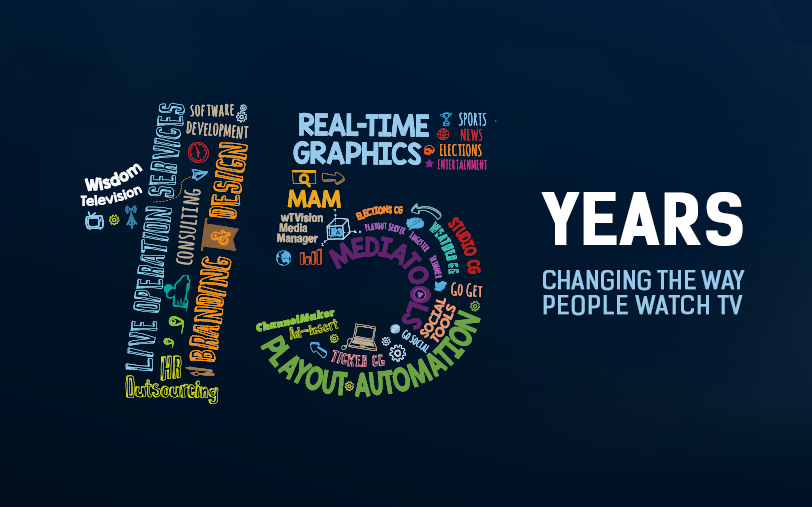 2016 marks 15 years since a group of 5 young people, with the common dream of bringing “Wisdom to Television”, set up a real-time TV graphics software company, from a small office in Lisbon (Portugal). This company was called wTVision and became one of the world's biggest real-time TV graphics providers in the world!

The development of a powerful software framework (Slides CG), many technologic partnerships and a strong ambition of the people involved, made the company’s reputation grow rapidly in the first few years.

Having started by sports and elections, and with its roots expanding within the broadcasting industry, wTVision started to provide many other solutions, from weather forecasts to entertainment programs (still on the real-time graphics). Still in 2001, wTVision gave another big step: entered the world of video. After having developed ChannelMaker, its playout automation system, the company started, step by step, to identify and fill the gaps to make it possible to deliver turn-key fully-integrated channel structures.

wTVision is now positioned as a global company with offices in 4 continents.

It’s been a really busy journey, with big steps that led the company to what it is today! Here’s a quick look to the last decade and a half:

2002 - wTVision covers an international sport event for the first time. A group of 10 people flew to Mali to work on the 23rd edition of the Africa Cup of Nations.

2003 - wTVision makes its first project to Basketball Euroleague (Final Four). 2003 is also the year of the first 3D graphics broadcast.

2005 - wTVision started to cover the Belgian League, opening an office in Belgium to locally  support this project.

wTVision is today a reference in the Poker world. This route started in 2005, the year of the company’s first live poker tournament, working with STVPI.

2006 - This year was the beginning of what would be a long partnership with TV Globo. wTVision provides its solution for live football coverage, which is still being used today.

2007 - Despite of its presence in several exhibitions in the previous years, where the company shared booths with partners (Inscriber, ORAD, Chyron...), it is in 2007 that wTVision has its first own booth in an international exhibition (IBC).

At this time, the success of the company was being more that proved with major events being “signed” by the company. One example is the PAN Arab Games, held in Egypt, a giant production that involved more than 20 experts just from wTVision.

The first election coverage in Spain happens also in 2007. From this moment on, wTVision starts developing projects in all elections, in this country.

This is also the year that marks permanent presence of the company in the Middle East, with local staff working from United Arab Emirates.

2008 - After the Portuguese and Belgium Football Leagues, wTVision wins the Spanish League (La Liga) in 2008. This major project leads the company to open an office in Spain. Today, wTVision is covering 11 national leagues around the world.

2009 - wTVision launches a new redesigned version of Studio CG, a powerful product for News Automation that later evolved for an integrated graphics and video controller used in broadcasters such as beIN Sports in USA, DD News, in India, among others.

2010 - In 2010, TV Globo presents a new project to wTVision: the creation of 2 international channels, and for that the company built a new channel distribution center in Portugal. At this moment, wTVision’s involvement transcended the supply of the technical infrastructure, adding the responsibility of the technical design, the facilities rental, resources hiring and management, and the distribution of the inputted signal, becoming the prime contractor of this project.

On the sports field, there are also huge marks. Since October 2010, with the Rip Curl Pro Search, held in Peniche, Portugal, wTVision becomes leader in Surf events with projects from France to Hawaii. wTVision also started to provide 3D stereoscopic graphics during this year, in projects such as: Estoril Open (tennis), Liga BBVA (spanish football league) and Rip Curl Pro Search, in Peniche. The partnership with the International Judo Federation starts also in 2010.

2011 - wTVision opens an office in Brazil. Since then, the company becomes the major graphics provider for motorsports events in the country.

2012 - wTVision opens an office in USA having as major market goal to provide solutions for channels’ master control rooms. During this year, wTVision also adds the french football league to its vast football portfolio.

This was also the year to reinforce the presence of the company in Asia, with an office being opened in India.

Still this year, the french market is reinforced with an office opening.

2015 - 4 major events mark this year: a strong investment in the Branding Services area makes the company win clients such as the RealMadrid TV and TV Record; the first wTVision elections project in Latin America takes place in Colombia, the first PCR Automation project is delivered in Brazil and the first Live 4K Broadcast Graphics coverage happens on ''El Clásico'' - Real Madrid vs Barcelona.

We’re proud of what we achieved so far, but we know there is still so much to do.  We want to invest in developing new products and new offices to ensure that we continue to grow sustainably in the next 15 years!