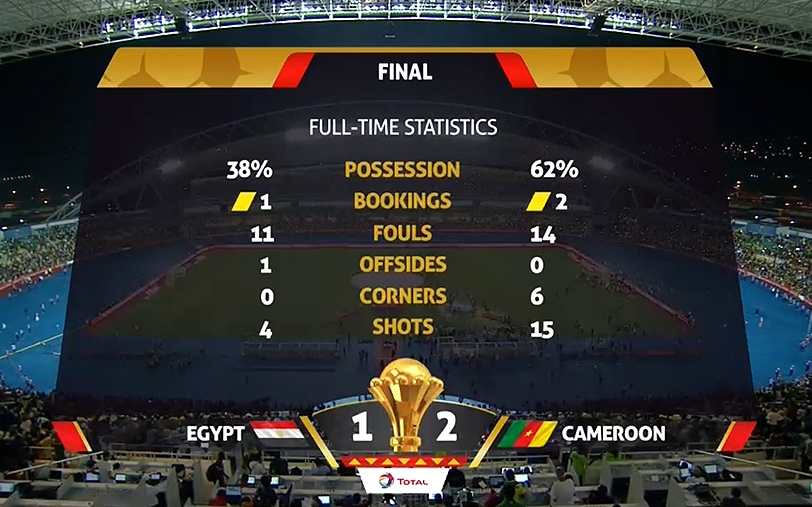 wTVision was the official statistics provider for the Total Africa Cup of Nations 2017, that took place in Gabon and was won by Cameroon, on February 5. The match statistics of the biennial African football competition were collected through FootballStats CG, wTVision’s software to gather, manage and compare football data, including player and team performance data through STATS SportVU® tracking system.

This comprehensive work included data gathering and management, detailed statistical reports (namely tracking data for the official web match center of the competition), support to football commentators and the official graphics for the matches in Port Gentil and Oyem (two of the four host cities). After previous successful collaborations, wTVision renewed its partnership with STATS to deliver the best statistical experience during this high-profile continental tournament.

wTVision deployed a team comprised of 15 experienced professionals to Gabon, four of them dedicated to the operation of STATS SportVU tracking system. “In an operational structure this size and in a competition as important as CAN, the tracking data is fundamental to provide a state-of-the-art broadcast to the audience and an invaluable support to the professionals covering the competition”, states Alexandre Guedes, wTVision’s Project Manager for the African tournament.

Roy Clements, STATS Sales Director added, “wTVision are considered to be one of the best global broadcast graphic support companies and STATS are extremely proud to once again partner with them in delivering a best-in- class service for the fans and media following the tournament.”

Check the official match center of the competition here: http://bit.ly/2jvyhsi