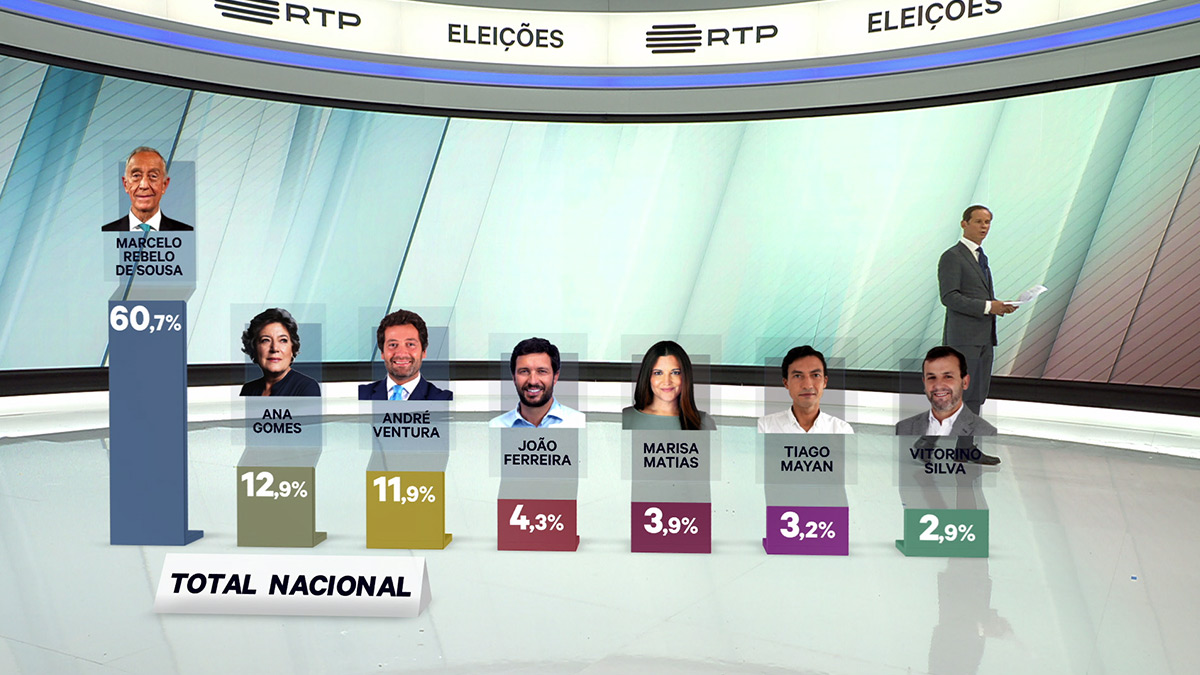 Augmented Reality adds relevant information in an intuitive immersive environment for viewers following elections at home. wTVision can adapt its AR solution to any pre-existing workflow or simply use its software stack to create a virtual graphics project from scratch. For this Presidential Election, we provided an AR solution for RTP with our very own software, broadcasting official data into state-of-the-art virtual graphics.

The complete graphic package and design for TVI’s electoral night were provided by wTVision’s broadcast design team. Following the guidelines given by the Portuguese network, our creatives built a concept and delivered a unique original look for one of the most relevant electoral nights in the country.

Everything from on-air graphics, wipes, bumpers, ledwalls and openers was designed by a team of creatives that have been developing the look and feel of multiple elections for years.

Our creative team also implemented all on-air graphics for the Portuguese Presidential election for RTP and Porto Canal.

wTVision is well versed in implementing rich complex concepts into live television, given the 20 years of experience in the broadcast industry. This time, our designers adapted a graphic concept to on-air tickers, full-screen charts, wipes and lower-thirds, amongst others.

Thanks to Elections CG, wTVision’s software designed to cover electoral events, real-time graphics and official data were integrated into live broadcasts. The system makes it easy to import results in real time and transform them into immersive graphics (including AR).

The same system feeds interactive tools like the Commentator, which allows political analysts and journalists to comment on the results and relevant data during the live show.

For RTP, wTVision also added a tablet solution, that made it possible for journalists to change graphics and highlight candidates, parts of the country or official results.

As for the TVI project, Elections CG integrated with Vizrt Multiplay for the first time to generate state-of-the-art graphics, control clips and live feeds.